Mr. Mayor is back this week for its second season with Los Angeles’ new chief executive still learning to manage City Hall. Created by Tina Fey and Robert Carlock, the comedy stars Ted Danson as Neil Bremer, a retired billionaire who runs for mayor of Los Angeles almost on a whim; once elected, he’s quickly in over his head. With a year of experience under his belt, the mayor is ready to shake things up at City Hall – by hiring a team of “innovation” experts. Holly Hunter costars as Arpi Meskimen, the no-nonsense deputy mayor who uses her decades of experience to steer Bremer into and out of trouble.

After a first season cut short by COVID-19, the cast was delighted to get back to work.  In a roundtable discussion last week, Hunter described the atmosphere on set as “joyful” and “delightful.” 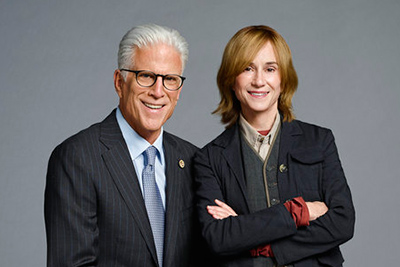 “There's just a little more confidence and intimacy with our characters,” she told SciFi Vision. “There [was] an automatic chemistry that existed between this cast that we're all I think grateful for, because that doesn't have to happen, and it did with us. There's a kismet there.”

Danson spoke of “a freedom that didn't exist the first season,” which was shortened due to COVIS-19. “We had taken a three or four-month break, like the world did, and during that time, as a cast, we Zoomed a lot. We stayed in touch, we shared…at a level that we probably wouldn't have been able to if we had just had a normal [renewal]. We really got to know each other and appreciate each other,” he explained.

“There's a process of discovering who you are as a group, as a show,” Danson said. “I think we gelled last season and it was joyful for all of us to appreciate the other characters, appreciate the other actors, bounce off of such amazing players. It was very exciting.”