Tomorrow Peacock releases it’s new limited series Last Light, based on Alex Scarrow’s bestselling novel of the same name. The thriller tells the story of a family separated in the middle of the chaos, when the world’s oil becomes unusable, and it sets off a chain reaction across the planet. Joanne Froggatt stars as Elena Yeats, wife to Andy Yeats (Matthew Fox), one of the world's leading petrol-chemical engineers.

Froggatt, who spoke with SciFi Vision in a recent exclusive, took inspiration for the character of Elena from a variety of different places. “I don't think I ever, or very rarely, unless I'm playing a real person, draw on sort of a specific person or anything like that,” said the actress. “I just do it in layers, really. I start, obviously, with the script and what the script’s telling me, and then I do as much research as I really need to do about the subject matters involved.” 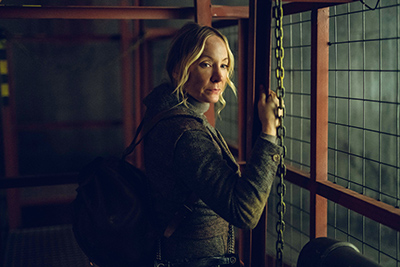 The actress also touched on working with Fox for the series. “Matthew and I did a lot of work with our brilliant director, Dannie Gordon, in rehearsals, because we don't have a massive amount of screen time together,” explained Froggatt. “We wanted to make sure that our marriage and our history as a couple [which] we'd worked out together had that sort of muscle memory of how they're feeling about each other now, how they've got to this point, what they're both feeling, [and] why they've got to this point.”

Froggatt also spent a lot of time acting opposite child actor Taylor Fay, as her son Sam, who she really enjoyed working with. “[It's] impossible to know how it's going to go when you're working with a child, one that hasn't been on a set before,” she told the site. “This was Taylor's first job, and he's eight years old. It could have been a disaster, because obviously, the majority of my scenes are me and Taylor, but it was an absolute dream. Taylor is such a smart cookie; he's so full of fun. He loved being on set. He had a really challenging role to play, and he just took it all in his stride.”

For more, including difficulties Froggatt had learning lines in French, and more, watch the full interview below, and be sure to check out Last Light, available starting tomorrow on Peacock.