Tonight, STARZ premieres the series Serpent Queen, based on the book Catherine de Medici: Renaissance Queen of France by Leonie Frieda. The historical drama tells the story of Catherine de Medici’s rise to power, with a contemporary edge. The story is told by Catherine (Samantha Morton) to her new servant, Rahima (Sennia Nanua) via flashbacks.

Playing someone like Catherine de Medici could easily be a daunting task, and Morton tried not to think about it, lest she become overwhelmed. “I approached her like I'd approach any other character,” the actress told SciFi Vision during a recent exclusive interview. “[It] is just trying to find the truth and be in the moment and understand the story and understand what people needed me to do and what their motivations were and to try and find a balance with all of that. But there's no denying that she's somebody that's incredibly formidable, and there was a level of expectation to get it right.” 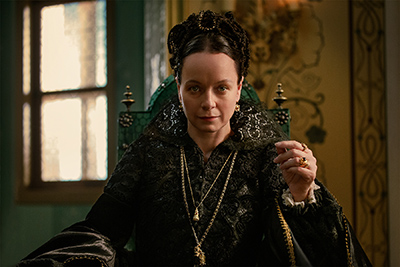 Costumes on the show are very extensive, but that’s only part of what helps the actress get into the character. “It isn't always about the costume for me, because, ultimately, I have to pay play Catherine whether she's naked, giving birth to a baby, or she's in her finery at her coronation. You have to go inside first, but there's no denying that once you get the clothes on, you stand differently; you walk differently. You can't not.”

During the interview, Morton also talked about what she was surprised to learn about Catherine, discussions she had about the character with Liv Hill, who plays her younger counterpart, and more. Check out the full interview below, and be sure to watch Serpent Queen, premiering tonight on STARZ.