Based on the book Catherine de Medici: Renaissance Queen of France by Leonie Frieda, the Starz series The Serpent Queen gives a contemporary look at Catherine (Samantha Morton)’s rise to power, told through flashbacks from her teenage years through adulthood.

According to Haythe, they became aware of the project ten years ago when friend and executive producer Francis Lawrence had read a piece about Catherine and told them about it. “It was really specifically about Catherine, Diane and Henry, this unusual love triangle,” Haythe told SciFi Vision, saying that the project went away, but then the book became available again. “The nature of the business had changed,” he explained, “because it really is a story you want to tell in an extended format. Suddenly, the television business had gotten to where it was, and and Francis and Erwin said, ‘Hey, it's available again, what do you think? Have a read.’ I did, and I immediately saw this possibility of telling a singular story of a particular tone, a particular voice, and one that was apt for our times.” 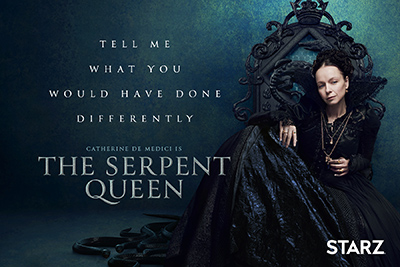 In adapting the story, that tone came very quickly. “The book is a brilliant history; it's very different from this show, but I thought she had a great subtle way of pointing at these details, real life details that were utterly absurd,” said Haythe, adding the example of kids throwing furniture out of a window as part of a game, which actually happened.

One of the challenges of adapting the book, however, was not making it a history lesson. “People talk about making the shows to feel contemporary, which is a really hard thing to do,” Stoff told the site, “because there is a certain expectation of a certain level of classicism, and to walk that line and not make it feel anachronistic [is difficult]. When people talk about making it feel contemporary, they don't realize that what they're really saying is make it feel real. Don't make it feel stiff; don't make it feel like these people know that they're living in [a period piece].”

“That's what Justin really did,” he added. “These are all these are all living breathing people with needs and wants and all of that, and because they're most of them are royals, they're free to express themselves.”

For more about bringing the series to life, watch the full interview below, and be sure to check out The Serpent Queen on Starz.