Published: Friday, 29 October 2021 12:13 | Written by Jamie Ruby
***The following recap contains spoilers for Season Two Chapter 1 - There is also a spoiler-free review available. There is also a recap of the season one finale if you need a refresher.***

Orphan Black: The Next Chapter finally returned today for season two. The story picks up where we last left everyone. After Charlotte revealed it to the press, the world is now in the know about the truth about the existence of clones. However, it’s not going as she had hoped. A lot of the clones are not happy after being lied to and many people still do not accept them.

Charlotte is helping run a crisis hotline trying to help clones come to terms with what they are. A woman calls that has locked herself in a bathroom to get away from her significant other, who is screaming at her for lying and accuses her of not even being human. Although hesitant to do it for fear police could escalate the situation, Charlotte coaxes an address out of the woman and Felix gives it to the police.

Vivi meets with Arun to tell him she is going on vacation. He questions if she is going to see the clones, but she is angry with them – their “pretend family” broke her cover, and she even had to save them. Having such a recognizable face doesn’t make for a good spy, and she can’t get a field mission and has been relegated to disk duty. She gives Arun the excuse for leaving that she wants decent espresso and Cuban food. All he cares is that she comes back again. Not used to talking to him in person, she isn’t sure if he’s being supportive and really cares or is just pitying her – she’s bad at flirting. He tells her that there are people who know how good she is and they will figure out a way around it. She’s not so sure but tells him that she will be back in five days. 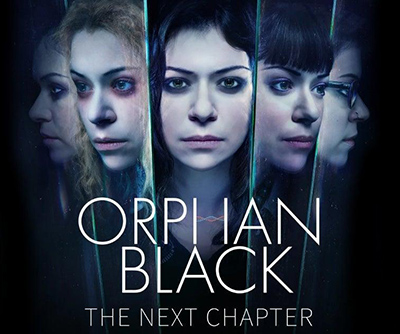 Helena’s book tour is about to begin, and Alison and Donnie are covering it for their reality series Clones at Home. They would have supported her anyway, but they also hope it will boost their sagging ratings.

Alison is worried about the online chatter (including the fact Donnie has a fan base!), and that clones are upset for the way they handled things and kept secrets and some are even blaming them for the attacks on clones.

Sarah, who agreed to accompany Helena on her book tour, as it gave her job the job of watching Helena’s twins, Arthur and Donnie, isn’t as concerned – she figured that people would be upset by the book, especially after they started marketing it as non-fiction. Besides, they saved everyone. Thankfully Helena was discrete about some things in the book – like the murders!

Sarah still isn’t used to her face being plastered everywhere – from Helena’s book cover to another book display for a new age book written by self-proclaimed heath guru, Blythe Winston, that has been gaining popularity, but she has to admit that things have been better with them not having to hide who they really are anymore.

Things take a turn, however, when people in the store start yelling and protestors show up, including one with a baseball bat. Thankfully a city cop comes in and stops them before the twins can escalate it even further, but he also accuses Sarah of causing trouble because she a clone.

Charlotte is devastated as they were too late to save the caller, and it wasn’t the first time. She blames herself for putting them through it all. Delphine and Cosima tells her it’s not her fault and they are proud of her for founding the help line with Kira; they have saved people too.

Charlotte says that Kira is now too busy with school and her girlfriend to even help anymore. She doesn’t feel she is doing enough and questions that other places are doing more, including helping to hire clones, a lot of whom lost their jobs once they were outted, including Blythe Winston’s company. Cosima thinks Winston is just trying to make a buck and that people will see through that. Charlotte just doesn’t feel like she can make up for the role she played in putting them through everything.

Charlotte leaves to do homework, staying in the basement apartment while Art and Jaysara are away at a bed and breakfast.

Delphine says they have a lot to look forward to in eighteen years, and Cosima says it’s a good thing they are getting practice. Delphine is now pregnant. She and Cosima argue about publishing their findings: they’ve found a way to create sperm cells from Cosima’s bone marrow so they are using genetic material from the both of them. Delphine wants to tell everyone to give clones hope for their infertility, but Cosima isn’t so sure.

Meanwhile, Felix, who’s now married to Collin, temporarily takes over the hotline for Charlotte to give her a much needed break. He tries to give advice having grown up the brother of a clone, but it’s not quite the same as talking to someone going through the same thing.

He gets a text from his agent and is thrilled that he’s being hired for a commission, because he is tired of painting clones.

Vivi’s plane lands on a private island and we realize that it wasn’t actually for a vacation but rather a job interview. She got an email out of nowhere where someone told her she could use her unique skills to help other clones. She steps out of the plane to be greeted by none other than Blythe Winston, who welcomes her to Haven where they are trying to offer all clones a new beginning and says that she will be the one to help them do it.
Twitter
BotonSocial por: SocialEmpresa
Category: Book Reviews