Published: Monday, 12 September 2022 14:00 | Written by Jamie Ruby
Warner Bros. Home Entertainment provided me with a free copy of the Blu-ray I reviewed in this blog post. The opinions I share are my own.

Today the sixth and final season of Lucifer was released on Blu-ray, DVD, and Digital HD.

At the start of season six, Lucifer (Tom Ellis) is in position to take over for his father as God, but does he want to be? The beginning of the season focuses on Lucifer struggling to decide what he wants as he prepares to go up to Heaven with Chloe (Lauren German) by his side. However, things take a surprising turn when a young angel named Rory (Brianna Hildebrand) shows up wanting to kill Lucifer. Throw in time travel, a ghost, a wedding, and animation, season six is full of surprises.

As always with Lucifer, the season brings action, drama, romance, and comedy and everything in between. Unique this season is the third episode, “Yabba Dabba Do Me,” in which Lucifer and Chloe enter an animated world of a character’s mind and are stuck in a broken loop, which is a lot of fun. 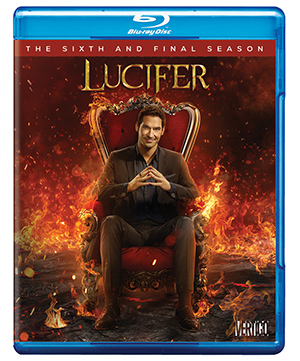 I also really appreciated the moments that were throwbacks to earlier in the series. There are multiple characters who appeared previously in the series, and I love seeing those moments come full circle.

Being the end of the series really brought with it a variety of emotions, and really divided me (and fans) in a way Lucifer never has. Without going into spoiler territory, there is a lot about the time leading up to the ending of the series that I didn’t like, however, the last moments themselves are a pretty perfect conclusion. I love how Lucifer has grown and finally found his calling. The series does an excellent job of wrapping things up, whether you love the ending or not. I didn’t feel like there were any loose threads that were left. Most characters got more than satisfactory endings, in my opinion. The ending may have been controversial among fans, but it was also one of the best final seasons and finales I’ve seen in a long time.

Whether you are a fan of the series, or joining for the first time, season six is not to be missed.

If you are a Netflix subscriber, the set is definitely not worth the price for the bonus features alone, but otherwise, it's definitely worth a buy; however, I would definitely go for the Blu-ray or digital to get the HD.
Twitter
BotonSocial por: SocialEmpresa
Category: DVD Reviews